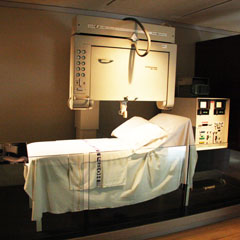 Today, ultrasound scanners are a vital diagnostic tool found in hospitals all over the world. The technology behind them was first developed in wartime to detect submarines underwater. It uses pulses of sound to detect differences in the density of the soft tissues of the body. An image can then be formed from the echos from these pulses.  The use of ultrasound in obstetric care was pioneered by Professor Ian Donald at the University of Glasgow in the 1950s. Commercial production started in Glasgow in 1960, but this particular machine was made by Nuclear Enterprises of Edinburgh in 1976.

Entrance to the National Museum of Scotland is free.