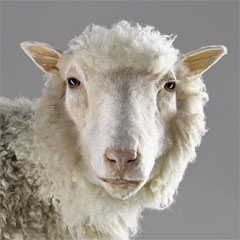 Dolly the Sheep was the first animal cloned from an adult somatic (body) cell. She was born at the Roslin Institute on 5 July 1996. Dolly had three mothers, one provided the genetic information, one provided the egg cell and the third gave birth to her. Dolly died in February 2003. After her death she was stuffed and you can now find her in the science and technology galleries of the National Museum of Scotland.