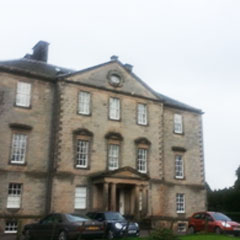 Originally a country mansion built in 1769 and thought to be designed by the Edinburgh architect John Baxter, this house was occupied by scientists at the new Agricultural Research Council (ARC) Unit of Animal Genetics and their families during the late 1940s and early 1950s. This communal living arrangement proved to be a turbulent experience which became immortalised in Edith Simon’s fictional book The Past Masters (1953). The house has now been converted into flats and offices on a site also occupied by a caravan and camping park, garden centre, golf course and crematorium.