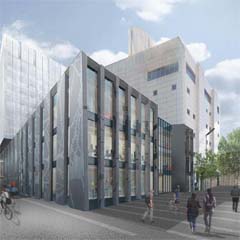 This building was occupied from 1968 by Britain’s first university department of molecular biology, founded in 1965. Two eminent scientists in this department were Sir Kenneth Murray (1930-2013) and his wife Lady Noreen Murray (1935-2011) whose research helped pioneer a vaccine for hepatitis B. This work was sponsored by Biogen, the first biotechnology company in Europe, which was established by Kenneth Murray and colleagues in 1978 with laboratories in Geneva and Cambridge, Massachusetts. In 1983, Murray donated his share of the income generated by this research to the University and established the Darwin Trust of Edinburgh, a charity formed to support education and research in the biological sciences. The Darwin Building is now home to the Institute of Cell and Molecular Biology and is currently undergoing redevelopment.