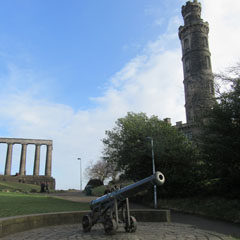 The ‘Portuguese Cannon’ tells several chapters of European expansion. Bearing a Spanish royal coat of arms – Spain ruled Portugal at the time- it was sent out in the 17th century for service in the Portuguese Indies, stretching from Mozambique to Macao. The cannon then got into the hands of the rulers of the Arakan (west coast of today’s Burma/Myanmar) from where in 1785, according to the Burmese inscription, it was taken to Mandalay. In 1885, Upper Burma fell to British forces and the cannon was exhibited at the Edinburgh Fair of 1886 and after that, taken to Calton Hill. 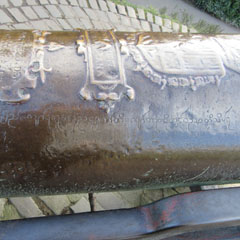 View of Spanish Coat of Arms and the Burmese Inscription.