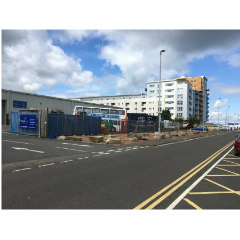 Middle Pier, now the location of businesses and further along residential development

In 1937, the harbour consisted of a Middle Pier (this road) protected on the east and west sides by two breakwaters, forming two harbours covering a total of 122 acres. Imports to the harbour were esparto grass, wood pulp and other paper manufacturing materials, motor spirit, asphalt, strawboards, and bog ore, while exports included coal, coke, and coke breeze. The coal came from the nearby Lothian coalfields, although a considerable load came from the Lanarkshire pits. Practically all the coke exported from the nearby Edinburgh Corporation Gas Works was shipped via Granton to Denmark, Sweden, and Germany. This building you can see ahead is the recently refurbished Gunpowder Store. This B-listed building is the sole surviving historic structure on the middle pier at Granton Harbour. The two-storey building, which was built with extra-thick walls to ensure it was safe to store gunpowder there, had a cast-iron hoist to allow it to unload ships docked in the harbour. Inside the warehouse, which was one of four match buildings created for the opening of the pier in 1842, there are the remains of railway tracks used by goods wagons. 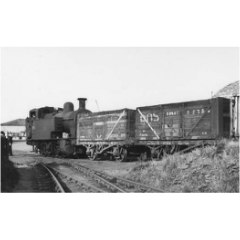 Coke train coming down from Granton Gas Works via Breakwater Junction to Granton on 4 June, 1958. 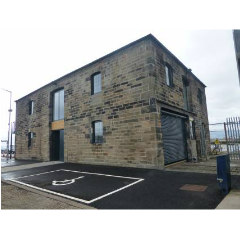