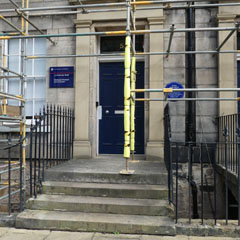 Sam and Julius Lipetz’s GP practice was here at 5 Roxburgh Street, next to the office of their patient, Nobel Laureate Peter Higgs at no.3. Their father, Lazarus Lipetz, had come to Edinburgh from Lithuania in 1888 aged 16. The area surrounding the practice included insanitary and overcrowded housing, poverty and unemployment in the streets to the south and east. Sam and Julius were deeply moved by the inhuman living conditions suffered by many of their patients, and were early advocates of the NHS. The brother’s partnership continued until Julie’s sudden death in 1972 aged 69. Neither was ‘religious’ and they attended synagogue occasionally. However, being ‘Jewish’ was very much part of their identities; there was hardly a communal activity, charitable or social, they didn’t participate in.