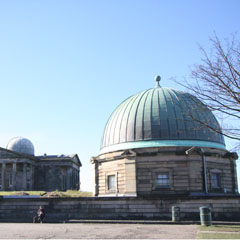 The City Observatory on Calton Hill

An observatory on Calton Hill was first proposed by Colin Maclaurin, Edinburgh’s professor of mathematics, in 1736. However, these plans came to nothing until Thomas Short brought a 12-foot reflecting telescope to the city in 1776, with the intention of opening a public observatory as a commercial enterprise. The university helped him with the cost of building the observatory on condition it was open to students. Short’s observatory became the property of the city on his death, but his daughter Maria Theresa ran her own observatory on Calton Hill before moving to a new site on Castlehill in 1850. Today, the site is run by the Collective, a centre for contemporary art. 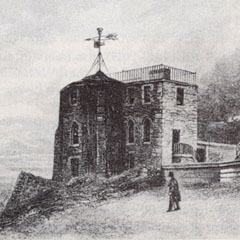 The Gothic Tower at the Edinburgh City Observatory on Calton Hill, 1792. 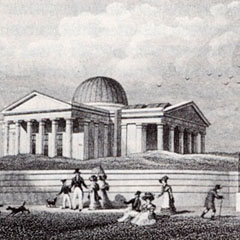 The Playfair Building at the Edinburgh City Observatory on Calton Hill, 1824.