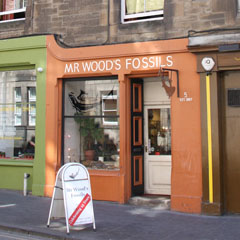 This shop was established in 1987 by the professional fossil hunter Stanley Wood, who, although he never held an academic post, made some important palaeontological discoveries. Perhaps his most significant finds were a series of fossil tetrapods, the ancestors of all terrestrial vertebrates including humans, in East Kirkton Quarry in West Lothian. These helped to fill Romer’s Gap, a mysterious era from around 360 to 345 million years ago in the Lower Carboniferous period from which tetrapod fossils had previously been thought absent. In addition to fossils, Mr Wood’s also stocks meteorites, rocks fallen to the Earth from Outer Space, of which mineral composition and structure are of significant interest to astronomers studying the formation of our solar system and its planets and asteroids.