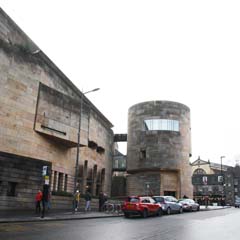 In 1596 the Society of Brewers, or, to give it its full name, the Fellowship and Society of Ale and Beer Brewers of the City of Edinburgh, was established on the site where the modern extension to the National Museum of Scotland new stands. Their brewing operation here was supplied with water pumped from the South Loch, later called the Boroughloch, which was later drained to create the Meadows.  A number of other breweries were established here in later centuries. Archibald Campbell started brewing near here in Campbell’s Close in 1710 before moving a short distance to the site of the Argyle Brewery, the buildings of which still survive between Chambers Street and the Cowgate. In the eighteenth century it specialised in brewing porter, much of which was transported by cart to be sold in Glasgow. There were three other brewers in this area at different times in the nineteenth century: Aikman, J. & T. Usher and William J. Raeburn.