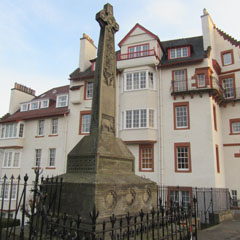 War memorials on the Esplanade include one to Colonel Mackenzie (92nd Highlanders) who quelled a mutiny of the 5th Bengal European Regiment in 1859. The events of 1857-58 are commemorated by the large ornate Celtic cross erected in 1862 by officers and soldiers of the 78th (Ross-shire) Highlanders in memory of their comrades. Another mutiny started right here. In 1778, 400 Seaforth Highlanders refused orders to embark for South India. Supplied by Edinburgh well-wishers they barricaded themselves on Arthur’s Seat for a week. Tricked into going to India afterwards, only 390 out of 1100 reached there able to fight. 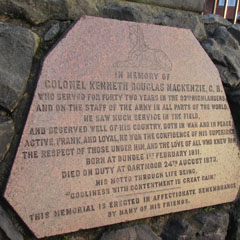 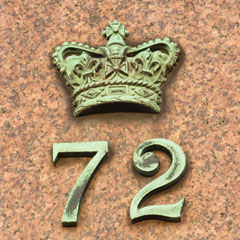 ’72’ cipher of the Seaforth Highlanders’ in honour of Kenneth Mackenzie, comander at the time of the Edinburgh mutiny.