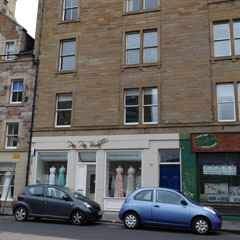 Lurie’s Butcher Shop was established by Joe’s uncle Lewis Lurie, an immigrant. Under Joe’s stewardship, the shop flourished. After World War II Lurie’s was the kosher butcher in Edinburgh. Joe Lurie was the social glue of the community. He bought his meat at the meat market and poultry from local farmers. The animals were slaughtered by a shochet. Lurie’s also sold delicacies like pickled tongue, and, for Burns Night (in late January) made his own kosher haggis. But the shop closed when Joe retired in 1986, and today kosher meat is delivered from Glasgow and Manchester. Opposite is 33 Buccleuch Street. Apparently, no.33 (Dray un draysik) was an unofficial centre of Jewish life in the 1920s and 30s where a minyan could be assembled by knocking on the doors on the stair. 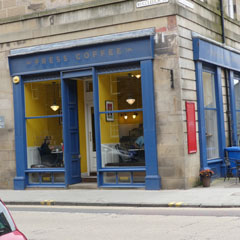