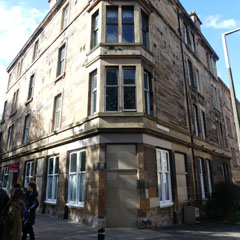 Before us is the edge of the Grange, which some Jews might have aspired to at the turn of the 20th century, but few would have reached until after World War II. For those of more modest means, Marchmont provided good solid housing – a great improvement over the old quarter. Even into the 1970s, Marchmont’s Arden Street – perhaps known to you as the home of Ian Rankin’s Inspector Rebus – had the largest concentration of Jewish families in Edinburgh. Today, the community is dispersed. Gone is the desire of most of those attending synagogue to walk to it. Although there is still a perception amongst Edinburgh’s Jews as to what areas remain ‘Jewish’ (and what areas are distinctly non-Jewish) it is lodged more in nostalgia than in fact.