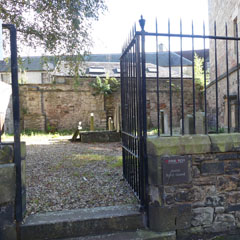 Braid Place cemetery was the first communal Jewish cemetery in Edinburgh. This cemetery was consecrated in 1820. Twenty-nine separate stones can be found in this cemetery. On the companion website you can find out more about one stone and the history it can reveal: Moses Ezekiel. Across the street is the house of the moral philosopher, Professor Adam Ferguson, one of that renowned group of literati of Edinburgh’s ‘Golden Age’, of the Scottish Enlightenment, where in 1786 the only meeting between Sir Walter Scott and Rabbie Burns took place. In that era, the house was so remote from the city centre that his house was called Kamchatka, the name of a village in north-eastern Siberia. Even 34 years later, when the Braid Place Jewish cemetery was consecrated, the area was considered remote. 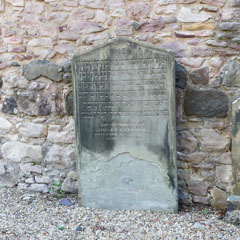