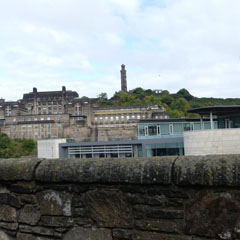 In 1794, one Hyman Lyon is among the 18 Jews in the register of aliens. He is famous for two reasons: 1. his book Important Discoveries in Chiropody. 2. his purchase from the City Council of a burial plot on Calton Hill for himself and his wife. This private mausoleum was rediscovered in 2013 under the slope behind the Observatory. Infamously, Lyon was a defendant in a libel action where, ‘all parties were Jews’. Rose Nathan accused others of ‘spreading rumours that she had been found naked in bed with other men’. She won her case, but it must have caused much disturbance in this tiny community. On St Mary’s Street observe a plaque commemorating Henry Littlejohn, Edinburgh’s first medical officer of health, whose sanitary improvements transformed this part of the city.