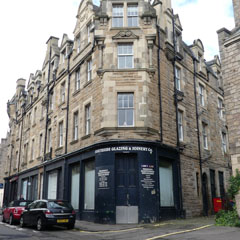 We are now in the heart of the Jewish area of the early 20th century. This is where many Jews lived, and certainly where they shopped. By 1914 there were four kosher butchers; and there were bakers: Mrs Sager on Guthrie Street, Mr Crouse and Mr Planlizy on St Leonards Street, and Sam Bialik on the Pleasance where queues gathered on a Sunday morning for bagels. Kleinberg’s on East Crosscauseway was the last Jewish baker in Edinburgh. The bakery was opened by Arthur’s father before World War I. Since Arthur was 16 he ran the bakery until he retired, at the age of 89, in 2005. Arthur is remembered most of all, for his challah, the sweet bread eaten on shabbat, and he revealed the recipe to the community shortly before his death.