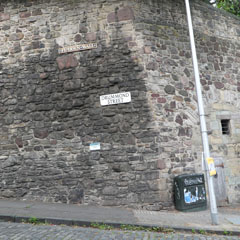 The community expanded between 1880 and 1914, the years of the great westward migration of Jews from Eastern Europe. The Southside of the city became the place of residence for the recent immigrants who largely originated in the Lithuanian part of the Russian Empire. Bustling with people, the soundscape would have largely yielded Yiddish accents. In the 1891, 1901 and 1911 Censuses we find the Rudom Family at different addresses on the Pleasance. Jacob Rudom worked as a travelling salesman, or a ‘trebbler’ in Scots Yiddish. Polly Rudom gave birth to 9 children; the records reveal that only one of her children died in infancy, a better than average survival rate. After World War II, city planning changed this part of town such that both street layout and buildings today are different from those inhabited by Jewish immigrants.