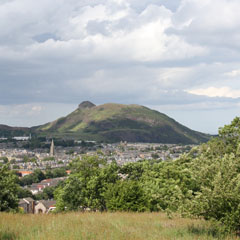 It was on Arthur’s Seat, the great volcanic plug that overlooks Edinburgh, that George Sinclair (d.1696) tested and calibrated the mercury barometer he had developed for estimating the depths of mines. In his book on hydrostatics, published in 1672, he described his barometer as well as a diving bell he had invented. Sinclair was an important advocate of the use of theoretical knowledge for practical ends. Like his contemporary Robert Boyle, Sinclair was also a strong believers in ghosts and spirits, whose existence he saw as proof of the truth of religion.